Howard Pyle, a life-long Wilmingtonian, was in his day the world’s most famous illustrator. Even now he is remembered as the “Father of American Illustration”. A Delaware native who became the foremost in his field, in his lifetime he produced 3,300 published pictures, 19 books, and nearly 200 magazine pieces. Pyle’s body of work stands as a testament to the fact he me may well be the greatest illustrator of all time.

As fine a writer as he was a draftsman, Pyle penned scores of children’s books which he filled with his own delightful drawings. The stories drew from folklore across the world. His book “Twilight Land” wove characters and threads from Far and Middle East together with an impressionistic, borderless style of illustration (which may have been influenced by the work of Daniel Vierge, a well know Parisian illustrator in his time). 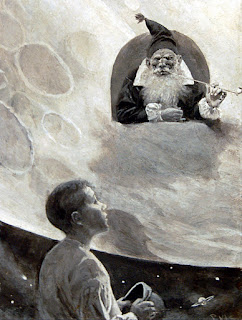 In 1889 he travelled to Jamaica with his pregnant wife, his children being left in the care of their grandparents. Sadly, their eldest son, Sellers, died at 7 years of age and was buried before they could obtain return passage on a steam vessel. Pyle dealt with his grief in the story “The Garden Behind the Moon” which describes the afterlife of children.

Pyle faithfully recreated European and medieval tales with his books about Robin Hood and King Arthur, which were well received in England, a tribute to his attention to detail as he had never travelled abroad then. These stories were illustrated in a decorative, woodcut style with art nouveau touches.

However, he is best known for his numerous and wonderful pirate illustrations and paintings, such as “Marooned”, which depicts a pirate who has broken the “pirate’s code” of honor and is subsequently exiled by his crew. 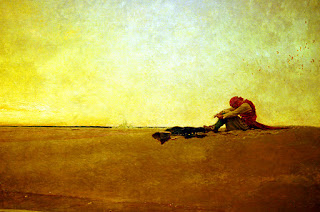 Many of his beach scenes were created at his summer home in Rehoboth where he would sketch the Delaware shoreline for his backgrounds before populating them with colorful characters.

Costumes and authentic props were used with models to provide accurate detail to a piece, but most of all imagination was stressed in the creative process. Pyle taught his students, “If you live in a picture the drawing will be good.” 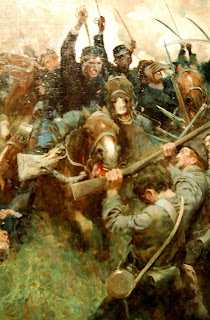 Political Cartoonist Rob Tornoe, a Delaware resident, admires Pyle not only for his work but also his unselfish education of promising young artists in his field, “The great thing about Howard Pyle, other than his remarkable skill as an artist, was the fact that he chose to share what he knew with so many other artists that would follow in his footsteps.”

Howard Pyle’s own artistic education concentrated on technique and application, a strict regimen which he considered lacking in imagination and vision. “I soon found that execution alone, no matter how skillful, cannot make a picture that the world cares for.”

The first school in the United States specifically for illustration was established by Pyle at the height of his career and in 1900 he expanded his personal studio space on Franklin Street in Wilmington to accommodate the entire endeavor. His classes numbered about a dozen students at a time, who were all instructed without any tuition charged.

The students became great artists in their own right and included N.C. Wyeth, Maxfield Parrish, Thornton Oakley, Frank Schoonover, Elizabeth Green, and Harvey Dunn. Each student recalls the love they had for Pyle as a teacher and as a person they never forgot him. Together their artistic tradition is referred to as the Brandywine School.

Collectively their illustrations convey the wonder and drama Pyle strove to fill his works with. Though they were mostly commissioned to accompany the illustrated word, the storytelling within the pictures themselves stands alone to convey the tales in breathtaking scenes detailed with impeccable draftsmanship. 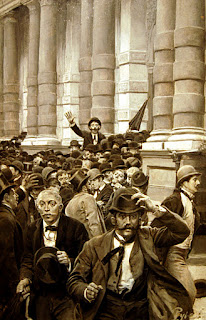 A treasure trove of Pyle's work can be easily admired with a simple trip to the Delaware Art Museum or the Brandywine River Museum, where they are proudly displayed as part of our local heritage and bear witness to the First State’s global influence in the art world.

The Howard Pyle Studio itself still stands on Franklin Street and has been the continuous base of operations for working artists for over a century. In fact, 2008 marked its 125th anniversary.

Pyle himself knew that it was not only his accumulated output as an artist, but also his effort as a teacher which would be his gift to the future generations after his passing, "I know of no better legacy a man can leave to the world than that he had aided others to labor at an art so beautiful as that to which I have devoted my life."
Email Post