The Wii Nunchuk: Nintendo's Secret Weapon in the Console Wars 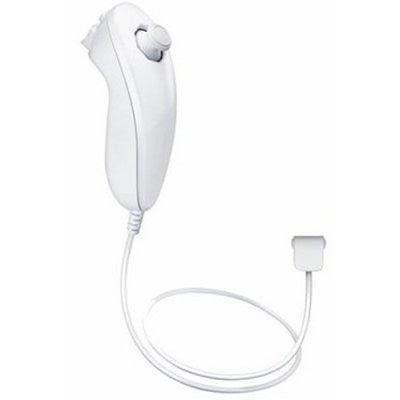 Video game consoles have become ubiquitous in the modern home. In fact, these days it is not unheard of for a household have more than one console from the same generation. The "seventh-generation" of gaming consoles has offered three major stars: Microsoft's Xbox360, Sony's PlayStation 3, and the market leader, Nintendo's Wii. Cumulative shipments of Wii hardware now exceed 67 million, along with nearly 510 million software units.

Nintendo has out-sold the competition, plus they've brought console gaming to a larger audience than ever before. Nintendo's more affordably priced Wii has made it accessible to a larger market, but the real success with the console has been the revolutionary impact of the Wii's control interface on the player's in-game experience.

The immersive experience of a video game in 2010 provides is a multimedia extravaganza, with hi-resolution graphics, thundering surround sound, action, drama, plot-twists, and blockbuster budgets that rival Hollywood heavy-hitters. Nintendo has turned a profit at every step of its triumphant march to the head of the class, while its competitors are left scratching their heads as to why the Wii has captured the imaginations of millions of families.

Most experts in the gaming press have written at length about the pro's and con's of the Wii Remote's intuitive motion control, which provides a very natural interaction with games through the use of infrared sensors and accelerometers to track arm motion. Microsoft and Sony have invested millions of dollar developing motion controls for their own consoles in response to the Wii's success, with mixed initial results.

However, the competition seems to have missed the greatest revolutionary breakthrough the Wii has introduced into the homes of tens of millions of gamers, the unsung Wii Nunchuk.

In 2005 the Nunchuk was unveiled at the Tokyo Game Show as the first controller attachment for the Wii-mote. It has similar motion-sensing technology to the Wii-mote though the use of an accelerometer, in addition to an analog stick and two shoulder buttons. A large number of Nintendo's first and third party titles require the Nunchuk to control their biggest selling games.

Consumers have responded with their wallets, in the United States the Nunchuk was the best selling piece video game hardware in January 2008, when it sold 375,000 units in just one month.

The Nunchuk expands the Wii-mote to accommodate the larger number of inputs required for the more complex control schemes demanded by the modern designs of the video game industry. The earliest popular video games, usually found in arcades, were coin operated and often had one simple joystick and perhaps one action button. For example, Nintendo's flagship character Mario's first appearance was in the arcade hit Donkey Kong in 1981 and sported one joystick and one button for jumping.

Today's sophisticated gamepads can have up to three analog joysticks and 8 or more action buttons. With many modern titles, one playthrough demands a cumulative 10 to 40 hours to complete. The ergonomic innovation of the Nunchuk, coupled with the Wii-mote, eases the most common physical side effect of marathon gaming sessions, hand cramps.

By separating a gamer's hands and allowing them to move independently of each other a great amount is stress is alleviated. By contrast, two or more hours with the Xbox 360's controller can leave a player's hands in a cramped, claw-like condition which is a significant discomfort and can be quite a distraction from the game itself.

The innovation was a stroke of genius and happened quietly while Nintendo's GameCube was languishing in the market place, eclipsed by the shadow of the PlayStation 2, which was the generational market leader by an enormous margin. In 2001 Nintendo commissioned Gyration Inc, to develop a new controller with motion control built into the gamepad for home consoles. The company eventually designed a prototype "Gyropod" controller which resembled a traditional gamepad, but broke away into two pieces, with one half designed for motion control. A watershed break-through never before attempted.

By freeing the hands from each other and distributing the controls between two separate devices, Nintendo pioneered a new era of game control, and in late 2004 they had designed the Wii-mote wand and its accompanying Nunchuk to be prepared for mass production in 2005. Five years later, people are still buying them in droves.

As of January 2010, the Wii leads the generation over the PlayStation 3 and Xbox 360 in worldwide sales, and in December 2009 the Wii broke the record for best-selling console in a single month in the United States.

The Nunchuk continues to be one of the hottest selling hardware items throughout the seasons, a clear hit with the consumers. Even the home-brew community has embraced the device; one YouTube video shows a proud hacker who has engineered a Nunchuk interface to cleverly control a sophisticated model train's full range of motorized features.

The original white Nunchuk was recently made available in black and this Valentines Day Nintendo plans to release a new Wii MotionPlus bundle which will include Nunchuks in pink and blue, so that gamers may continue their love affair with what might be the most popular piece of video game hardware ever designed, the wonderful Wii Nunchuk.
Email Post