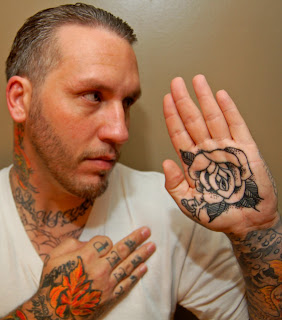 
Mark Thousands is a Delaware singer songwriter who has toured extensively as a guitarist with well-known American Hardcore bands such as Leeway, 25 Ta Life, and My Body My Blood.


Despite his rough Rock pedigree, as a solo artist Mark is known for his intimate brand of soft, acoustic music. He's bringing his friend Richie Birkenhead, of Into Another, to perform locally for a one night only show together.


Years after his work with legendary Hardcore bands Youth of Today and Underdog, Richie and his influential Post-Hardcore band Into Another managed to crack the Top 40 of Billboard's Mainstream Rock charts with the song “T.A.I.L.” .


Mark and Richie are both in a growing movement of maturing musicians from the American Hardcore scene who are currently crafting thoughtful songs with Folk sensibilities for a broader audience.


Gentle Jones: What do you consider the Golden Age of American Hardcore?

Mark Thousands: For me, the Golden Age was when Hardcore bands started pushing the boundaries musically and lyrically. This sea change started to happen in the early 90's with bands like Quicksand, Burn, Leeway, and Into Another.  Into Another really pushed the envelope. You either loved them or hated them and if you loved them you were a fanatic.

The Post-Hardcore movement was like the Renaissance period for Hardcore. I loved the abstract style guitar chords that Hardcore bands started doing, the abandonment of typical song structure, and more vocal melody was integrated. It was the best thing to ever happen to the scene.


Gentle Jones: Did you live in Delaware during this “Golden Age of Hardcore”?

Mark Thousands: I was living in Wilmington, Delaware but was always going to shows in NYC and New Jersey, and of course Philly. I remember being secretive about my trips to the city because my mother would've had a heart attack. I was in my late teens.

I remember being 21 and in a club in NYC and Chaka from Burn was the DJ for the night and outside on the corner was Mackie who played drums for Cro-Mags and Bad Brains. He was just hanging there wearing a pair of head phones. I knew I had to make more trips up there and make some friends.


Gentle Jones: How did you meet Richie?

Mark Thousands: I first met Richie in 1993. Into Another played a show at The Revival in Philly. I was young and nervous speaking with him, and he was such a prodigious influence on me as an artist, I was frightened I was going to say something dreck and it was going to end our conversation quickly. Luckily, I didn't. We talked through email after wards and then lost touch for some years.

About five years ago we reconnected and till this day talk regularly. He was kind enough to come into the studio with me and produce, as well as do guest vocals for my debut solo CD "With Love And Light Always" which is a far cry from Hardcore. Richie and I both were listening to the same artists at the same time, artists like Nick Drake, Bob Dylan, and Joni Mitchell.

When I first brought my solo material to Richie I was just scratching the surface on how to be a soloist. I didn't really know what I was doing yet. It's such a different animal than being part of a band. My first meeting with him was a schooling of sorts. I was nervous performing my songs in front of him in his living room.

That was a segue into a discussion we had about performing and how important it is to perform with your heart and convey the emotions outward accurately that led you to write the song to begin with. So he popped in a live DVD of Joni Mitchell. He put on the song "A Case Of You" and the performance that she delivered was heart wrenching. She bled in that performance, and her pain was displayed in every vocal part and guitar melody. I never thought of a performance that way. I was still learning what it meant to be a song writer and performer. I drove home from NYC realizing I had my work cut out for me, but it was beyond inspiring. He taught me a lot that day for sure.


Gentle Jones: Do you think the anti-drug Straight Edge hardcore movement had an impact on the Hardcore scene, or the Rock scene in general?

Mark Thousands: Straight Edge had a huge impact on Hardcore, without a doubt. The Straight Edge movement had this element to it that was tough, and went against the reckless antics of Punk that I didn't care for anyway like drugs and drinking. It had a serious message and a positive one. In the early 90s I got "Straight Edge" tattooed on me in kanjis (Japanese writing), I wore an "X" on my hands, the whole nine. It was a phenomenon at shows and it brought a sense of unity which was a main theme in the hardcore scene.

The problem with it ultimately was that it spawned militant disciples and it brought a lot of violence into Hardcore. Kids formed gangs with their friends and you would hear about senseless beatings like, a kid got hospitalized at a show simply because he was smoking a cigarette outside. It lost its positivity. I think Straight Edge is still an underground thing, I don't think it has a place in rock music per se, to me it's a Hardcore thing and most likely always will be. It's lost its steam that it once had in the mid 80s and early 90s but I believe it's making its way back around again with bands like Ghost Ship.


Gentle Jones: Have you toured recently?

Mark Thousands: .The last tour I did was exactly a year ago in Europe. I spent a month over there opening for Samiam. I was playing guitar for a Delaware band called The Casting Out. We did rock stuff with a punk feel. I sold my solo CD's while I was over there. The shows were great. Samiam were extremely fun to tour with. The tour was a month long and even though the shows were great, I was happy to get back home to my family. Something about being out of the country made it more intense. I communicated with my girlfriend Alicia online only. I had to borrow other peoples laptops because I didn't have one. She would let me know how our son was doing. If you're reading this and you tour out of the country, definitely get a laptop!

Gentle Jones:  Is there a broad movement toward Folk music in the Hardcore scene?

Mark Thousands: It's interesting, I think a lot of the guys in the 90s that were doing "Post-Hardcore" are the ones today that are pursuing solo careers doing more intimate, quiet music. An acoustic guitar being the main instrument of choice and in the forefront. Guys like Richie, Walter Schreifels (Gorilla Biscuits, Quicksand, Rival Schools, Walking Concert), Ian Love (Rival Schools, Die 116, and Cardia), all have been doing a style that could be perceived as Folk. Certainly acoustic, quieter, and more intimate.

I'm not certain that it's a broad movement but there is definitely something that's going around with artists from the Hardcore scene doing more quieter folky type stuff. I think there are  parallels as far as lyrical content goes between Folk and Hardcore, that “music with a message” type of thing.

I don't consider myself Folk in any way. I feel a lot of people like to use that label if you have an acoustic guitar on your lap and I also think a lot of artists throw on the proverbial garb and dub themselves as "Folk." I feel like that's a gimmick.  I consider myself a singer songwriter because that term is very matter of fact, I sing the songs and I write them. They are very personal and cathartic to write and sometimes difficult to sing without becoming too emotional which I feel is paramount. It's certainly above being part of a genre.

I'm not politically sophisticated and have never been a fan of protest songs. I think Folk was originally built on more political style lyrics. However, I do listen to Folk artists and I'm a huge Bob Dylan fan. But even Dylan didn't wish to be type cast into being perceived as a Folk musician.  My songs are about personal experiences.  I find it interesting that the bands that were ahead of the curve in the Hardcore scene in the early to mid 90s seem to be the same ones pioneering this new quieter sound today. I love it. I'd like to see more of it.


Gentle Jones: What place does our local area hold in the history of American underground music?

Mark Thousands: I think Delaware is right around bigger cities here on the East Coast that used to have an amazing hardcore scene. NYC, New Jersey, Philadelphia, and Connecticut. I'm not sure hardcore exists anymore. I know there are bands playing that style still but I haven't seen any movement or scene like there was years ago. But in terms of underground history, I'm not sure.

We were blessed to have bands like My Body My Blood, Hard Response, Stormwatch, and Boy Sets Fire. All of the aforementioned made an impact in the underground scene and all came out of Delaware.


Gentle Jones: What are the details of the gig?

Mark Thousands: The show is on Sunday November 27th at Mojo Main in Newark, DE
the cover is $10 and it starts at 5:00pm with Richie Birkenhead (Into Another/ Underdog/ Youth of Today)
Email Post