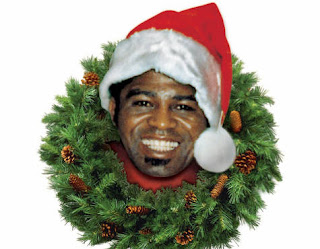 Our Yule traditions stretch back hundreds of years. Christmas 2006 the world lost a great man who will be remembered this season as a musical pioneer and an iconic champion of the people -- James Brown. Perhaps his mark will remain every holiday through the coming decades. 'Tis the season to be funky.

Brown had over 100 hit records during his career spanning half a century. In addition to being a chart topping success, Brown's affect on the lives of millions of people worldwide is incalculable. Break dancer Crazy Legs of the Rocksteady Crew recalls, "James Brown's music has had the biggest influence on my life." Rapper Nas says, "He was pure greatness."


In addition to touching the personal lives of numerous music lovers, Brown's polyrhythmic style profoundly changed American pop music. Chuck D of Public Enemy says, "James Brown was the funkiest! To this day, there has been no one near as funky. No one has even come close."

To enjoy December 25th as a day of remembrance for Brown is only fitting. "There is nobody who is more influential to hip-hop than James Brown," states KRS-One of Boogie Down Productions. "Kool Herc said that James Brown was the A-1 B-boy, the first MC, the first DJ -- 'cause he had two drummers. The drummer was what the turntable is today. When one finished playing, the other'd start, and sometimes they'd play together! Tell me this man is not hip-hop, straight up! James Brown is our artistic father. We all sample from him. This is a day where we exchange gifts. The gift exchanged with us from James was our culture. He freely gave his music to our culture. To me, that brings tears to my eyes! That's the lord and savior. On December 25, James Brown gives the gift of himself to his children."


James Brown started two of his own holiday traditions in his hometown of Augusta, Ga., that are carried on by the Brown family after his passing. A Thanksgiving turkey giveaway and an annual Christmas toy giveaway continue in his memory. The Rev. Al Sharpton was on hand to hand out the first turkey during the event.

"He made soul music a world music," Sharpton told the Associated Press. "What James Brown was to music in terms of soul and hip-hop, rap, all of that, is what Bach was to classical music. This is a guy who literally changed the music industry. He put everybody on a different beat, a different style of music. He pioneered it."

Interestingly, Sharpton vowed to grow his hair after Brown told him that his locks were a source of strength, as in the story of Sampson and Delilah.

James Brown introduced Reverend Al Sharpton to the Vice President of the United States as his “son.” Rev. Sharpton promised to wear the style so long as Mr. Brown was alive. When Mr. Brown passed Rev. Sharpton vowed to continue the tradition.

Rapper Snoop Dogg was similarly instructed by Brown and to this day also wears his hair long.

"That's my Godfather," Snoop Dogg said. "The hardest working man in show business of all time. He'll be missed, but his music and his legacy will live on through me in every way you can imagine."

Film star and rapper Ice Cube was also a lifelong fan. "James Brown was the first solo singer that I loved as a kid," Cube stated. "He was not only the Godfather of Soul, but the Godfather of Funk and Rap. Music will never be the same."

"You celebrate Christmas and you don't say, 'Jesus is born on this day,' -- the ancient reason is Christ is born in you! God is born in you for another year. James Brown passing on Christmas could mean the birth of soul in you. He is the Godfather of Soul -- not pop, not R &B, not rock, not blues, not jazz -- soul music!"

lucky883 said…
In 2001 an A & R named Jesse "Ese" Ferguson solicited my demo. Back then he was working with a New York Indie label Embedded and the now defunct DefJux. He also represented a new group, Babbletron, who were working on their first official release.
Phlebotomy Schools,DEL
9:52 PM