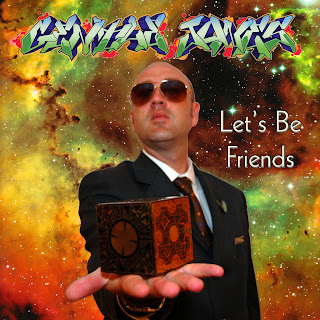 From 2012, I like Alchemist, Kendrick Lamar, and Killer Mike better than Gentle Jones "Let's Be Friends". That's it. I think this LP is better than several of my other favorites last year. Nas, Sean Price, Chino XL, Kid Koala, etc.

Gentle Jones has been toiling in the Delaware music underworld for more than a decade, developing his talents and honing his skills in the manner of musicians of a bygone era: by performing on every stage, in front of any crowd that would listen. Along the way, he has amassed a catalog of home-made dub tapes and CDR releases, and picked up a small following. It would have been easy to dismiss Gentle as the rapper-equivalent of your town's favorite garage band: a worthy addition to the music scene; an admirable practitioner of the art of rap; but an artist who was destined to live and die without making much of splash. That was until Little Mafia Records decided to take a chance on the not-so-young MC by putting out his Let's Be Friends LP on vinyl. Now Gentle has a testament to his tremendous talents that will stand the test of time. CDs, tapes, and especially mp3's are ephemeral. Vinyl lasts forever. And Gentle Jones's music deserves to last forever, too. 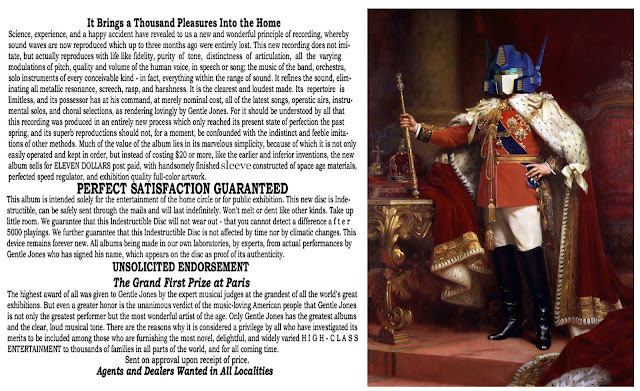 The Let's Be Friends LP comes packaged in a red jacket and plastic sleeve. There is a full-color fold-over that contains a picture of Gentle, the track listing, and a strange promotional message on the obverse. Printing full-color LP jackets is prohibitively expensive, especially in this day and age, when legends like Public Enemy fail to generate sales of even 2,000 units. Folks blame downloading for hip-hop's cultural decline, but really, it's artists' and labels' abandonment of vinyl -- the format most vital to the culture -- that should be held responsible. Oh, you can afford a $20k Jesus piece, but you can't afford to press up 100 LPs out of your own pocket? Get outta here! Gentle and Little Mafia serve as rare exceptions to this rule, and this vinyl-only release demonstrates their commitment to music as art; not just fleeting entertainment. The actual wax here is thick and colored -- it's something special. Vinyl pressings can go terribly wrong, especially when budgets are too low for professional mastering services, but Gentle and Little Mafia either did everything right or got awfully lucky, because this record sounds amazing.
Now, on to the music itself. The opening cut on Let's Be Friends is the most single-worthy; a posse cut dubbed "The Cleaners." Gentle spent a good part of his young-adult life as a janitor, and on this track, he's joined by fellow former "custodial technicians" Jon Conner and Jay Hollett, rocking over an incredibly dope beat provided by Dale Chase. The track sounds like its dominant samples originate from 1930's Vaudeville, and they pair nicely with chopped-up and replayed drums from the Honeydripper's classic "Impeach the President" break. I especially like the ragtimey horn section that periodically intrudes, first at the 0:50 mark, giving the track an even snappier Depression-era swing for the emcees to kick their snappy-but-slightly-depressed rhymes. The song is predominantly humorous, with the rappers assuming a light-hearted tone for their detailed descriptions of a janitor's thankless tasks, and we also get an inside look at how (some) custodians really spend their time: getting drunk and high, sleeping on the job, and pulling the wool over the dickhead-boss's eyes. All three emcees have quotables, but it's Gentle himself who has the best passage when, voice filled with exasperation, he huffs: "All ya'll quit pissing on the stall walls/ if I catch ya, I'm a spray Lysol on your balls!" The interplay between the rappers is great, the beat is world-class, and the rhymes are humorous... but there's also an underlying gravity to the lyrics, intended or not; as this song serves as a subtle meditation on how we view members of the working class in America. This is a blue-collar opus in the guise of backpacker hip-hop, but it's done well enough that it can be enjoyed as surface-level, humorous fluff; or as something more.
As good as "The Cleaners" is, the follow-up cut "Smarty Jones" actually exceeds it. Here, Gentle is allowed to "rock, shock, roll" on the solo tip, dropping bar after bar without taking a breath, rather than the in-and-out, four- and eight-bar verses he spits on "The Cleaners." Unfettered by pop-rap conventions, Gentle is not the type of emcee to drop his three 16's and call it a day -- he raps his ass off over the pulsing bassline, hard-hitting drums, and funky flute loop of "Smarty Jones." During the breakdown on verse 3, Gentle drops tongue-twisting bars: "Just a loud mouth, foul mouth, down to wild out/ You think that's what this rap game needs?/ Another coke smoker going broke off poker/ every rhyme that I wrote, I'm trying to yoke these jokers/ smoking-coat and some loafers on the sofa watching Oprah/ while I'm on the low, sewing the clothes of a soldier/ Motorola soul-controller, cold, like polar/ flare, like solar; only gold I rock is if I had holes in my molars/ from too much Coca-Cola/ my breakfast of champions: candy bars and soda/ maybe a bagel or a doughnut/ I hope I blow up, but if I don't, so what?" That final bar is Gentle Jones, Inc. in a nutshell.
"Faustus Diary" is Track 3, and it's a stylistic departure for Gentle. Over a haunting, violin-driven backdrop, Gentle narrates the story of a man "born on the wrong side of life," who indulges in bizarre, violent fantasies as a fry-cook by day, serial killer by night. The opening lines of "Faustus" cite a Jack the Ripper letter to Scotland Yard, but the song reminds me of a really far-out, early Geto Boys joint; a cautionary tale of extreme psychosis. Spoiler alert: the villain bites it in the end, just like in all classic gangsta rap. While this may be my least favorite track on Let's Be Friends (word is that Gentle's mom agrees with me), it is not a song without merit: like "The Cleaners" it works on multiple levels; as a straight-up horror-core song, as a battle-rap "for real," as a masterful Poe-like narrative, and as a deeper examination into the motivations of serial killers. "Faustus Diary" is a good song; it's just not as good as the rest -- and this is the one that actually got Gentle his deal with Little Mafia!
With six rap songs, five of them solo, Gentle shows diversity and skill that put him head-and-shoulders above his home-made dub tape- and CDR-level peers. He's a real artist. He's a real emcee. But Let's Be Friends is not just a rap album. No, Gentle wants to be friends with punk, ska, and even bar-rock fans. Side A of the LP concludes with the raucous and authentically punk "Flash Mob," on which Gentle is joined by rock-band the Barons. Here, Mr. Jones details the origin of that term, which has since been co-opted by the suburban squares the song's protagonists pick on, and he invokes the raw power that music once inspired in America's youth.

My favorite cut on Let's Be Friends is probably "Simple" -- but it didn't start out that way. On first impression, the Jon Conner beat sounds a little like an early 2000's Dr. Dre/ Scott Storch imitation -- not bad, but a strange choice for someone as artistically progressive as Gentle Jones. As he opens verse 1, Gentle's rhymes aren't particularly attention-grabbing, but he builds momentum and interest as the verse progresses; ultimately entrapping you by the time the hook (familiar to long-time Gentle fans) comes in. Then, in verse 2, Gentle opens with some surprisingly fluent Spanish. After four bars, there's a pause, and you think he's going to go back into English, but no: he keeps flowing en Espanol, dropping quips like "dame la mota" and "orale guey" -- this isn't high-school Spanish, but real chilango slang. Finally, just when you think there've been enough surprises, the track concludes with an intense drum-n-bass outro, orchestrated by Gentle himself. By the end of the song, you feel foolish for ever questioning Gentle's songwriting.
I was similarly surprised by "Electronic Arts." At first, I thought the song would be the LP's weakest, as the "video-game beat" thing has sort of been done to death. Nevertheless, Gentle beats a dead horse back to life with the help of DJ E, who scratches video game samples, making them familiar but funky.

"Murder Mouth" is another solid song: it opens Side B and is said to be Gentle's favorite to perform live. Its beat has an Australian aboriginal feel, and Gentle spits some of his most impressive battle raps on this disappointingly brief Yanick Blancho track. This is another winner that's simply overshadowed by Let's Be Friends' more ambitious endeavors.

"Anthem of the Champion" is an amazing, but excruciatingly too-short ska song, where Gentle out-Sublimes Sublime with clever and well-sung bars over musical accompaniment by the Bullbuckers. Tremendous lyricist in a unique sense. Great vocals! Effortless.
And finally, "Kicked Out of This Bar Before," while the "least Hip-hop" of Let's Be Friends' ten offerings, is objectively its best song: pure perfection. You can't tell me there's a single bar in blue-collar America that this song could not tear down. No way. "I've been kicked out of this bar before... And it just might happen again!"

Let's Be Friends concludes with "Manslaughter," a solo track by Gentle's DJ, DJ E, which is one of the most interesting all-turntable compositions I've ever heard. The scratching is superb, if not Q-Bert level, but it's the songwriting here that draws you in. The average person can hear an Invisibl Skratch Piklz set and think of it as little more than well-done noise, but "Manslaughter" is a good song that can be appreciated by any open-minded music-lover -- not just hardcore hip-hop heads. By not even appearing on the album's closer, Gentle is sort of giving a middle finger to all his doubters and haters. It's like he's saying, "What more can I do? There's something for everybody on this LP, and if you don't like it, then fuck you. Maybe we can't be friends after all."

Gentle Jones is the real deal. He can rap. He can sing. He can even skateboard. The aesthetic of this album and his music in general is pure Hip-hop -- even when it's not Hip-hop. It's Hip-hop from the days when there were no rules; when Rap and Punk co-mingled in the New York City streets, fused, and created something totally fresh; revolutionary, even. This new cultural phenomenon reached young Gentle Jones in not-so-nearby Delaware and infected him to his core: it can't be exorcised. He's Hip-hop as thoroughly as the Cold Crush Brothers; as thoroughly as Fab Five Freddy; as Crazy Legs; as Basquiat. He's from an alternate future of a forgotten past, showing us what hip-hop could have become.

He's all of this, and he deserves better than he's gotten from the underground hip-hop world -- or for that matter, the indie music scene. He deserves an audience. Perhaps he'll get it. Perhaps his next LP will be heralded as a genre-bending masterpiece by Rolling Stone. Perhaps not. Perhaps thirty years from now, a kid will discover a beat-up copy of Gentle Jones "Let's Be Friends" at a used record store, take it home, and be blown away. Perhaps he'll look up Gentle Jones on whatever has replaced the Internet by then, contact him, and let him know how much he enjoyed the record. Let's hope that Gentle doesn't have to wait that long to feel the love he deserves. 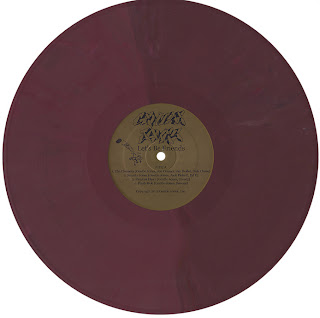