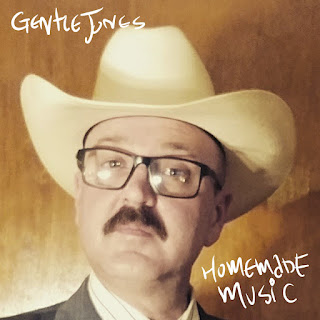 Gentle Jones writes it down, and lets it loose. Cannonballing through the decades with always fresh flavors, GJ is a versatile poet. His latest outing, Homemade Music is a wild one. It "Feels Right" from the get-go.
A talented artist, for sure, Gentle Jones reels you in sooner and later, again, with a good punchline or an ingenious hook. But this type of Homemade Music is not for the faint of heart. GJ knows how to get nasty even at his most tender moments. There is heartfelt power throughout the album, like in the protest anthem “Welcome To The Jungle” which is not to be missed.
As a definite plus side, the album is “rooty” all the way, including speaker rattling Boom-Bap, sparkling Americana, even sneering Punk Rock. If it doesn't have roots, it cannot grow; Gentle may push it a bit far into the red for some, yet if you’re down and up for the ride, it can shimmer and shine like Emerald City come to life, with Gentle Jones crowned King of the Forest. This lion never sleeps.
The whole shebang features an army of amazing guests. From Grammy Award winning producer Joe “The Butcher” Nicolo to Vast Aire of Cannibal Ox fame. Vast, a distant cousin perhaps, puts it down on "Night Light", and gets it up for his verse.
At nine tracks, it's just the right length, Gentle Jones Homemade Music is a valuable resource in these economic times. To see how far the monkey can run is one thing, while totally something else is the long-haul flair Gentle Jones keeps manifesting. Here's to a better year, as we once again experience Gentle Jones: a pioneer poet with a wild ear for the full spectrum of sound.

Peter Mekeovits is a longtime Music Critic from Helsinki, Finland