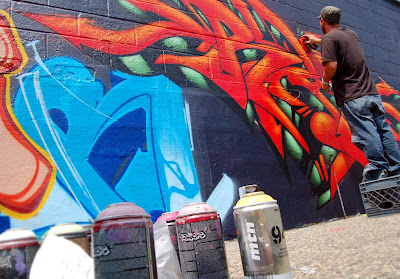 This year's festivities included a 2 block mural which featured outstanding pieces from writers such as SEEN, ARAB, and SYE. B-Boys and B-Girls also represented over classic tracks from Michael Jackson, Nu Shooz, The S.O.S. Band, Shannon, and more. There were several local designers and vendors showing their wares as well as delicious chicken and burgers grilled to magnificence.

The B-Boy BBQ was founded in 1997 by Pose2 who states, "Our continued and sole purpose is to maintain and celebrate the styles and traditions of our community through HIP HOP culture."

This well attended family event entered its 9th party after a brief hiatus. Previously at the Hawthorne Rec Center at 12th and Carpenter, the event was forced to cancel the 2008 B-Boy BBQ due to complaints of excessive vandalism at the 2007 event.

It was a gorgeous day on Westminster Avenue in West Philadelphia as Hip-Hop heads of all ages came out in numbers to celebrate the return of one of its finest parties.