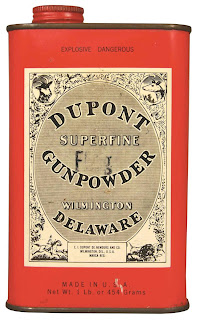 "ORDER FOR POWDER Messrs. Dupont & Co. Six kegs more of powder is want for the use of the State of Delaware. Yesterday there was but one Brittish Sloop of War in the Delaware. - Wilmington May 13 1813. JNO. STOCKTON"

On January 28, 1811, in order to encourage the establishment of manufacturing industries in the state, the Delaware General Assembly passed an act exempting certain manufacturers, including gunpowder producers, from state militia duties.

With the outbreak of hostilities between Britain and the United States in 1812, Victor and E. I. du Pont formed a private volunteer militia, known as the Brandywine Rangers, to protect the interests of their Brandywine factories from enemy attack. Throughout its existance this private Brandywine Rangers army was a controversial topic in Delaware.

The election of 1813, in which the Federalists swept the State of Delaware, resulted in charges that the du Ponts had used their influence with the militia companies improperly. Running counter to the Federalist tide, the Democrats had cast a majority vote in Brandywine Hundred, and their detractors, most of whom were either Federalists or Francophobes, exerted pressure which finally resulted in the disbandment of the Rangers early in 1814.

On January 17, 1814 the act exempting manufacturers was repealed, forcing the du Ponts to disband their militia and allow their members to be absorbed by local state militia companies.

Shown here are two documents: an address by Victor and E. I. du Pont to the companies of the Brandywine Rangers informing them of the state's January 17 repeal, along with a response from militia representatives; and a letter dated February 7, 1814 from E. I. du Pont to Callender Irvine, superintendent of military stores in Philadelphia, informing Irvine of the state's action and expressing du Pont's trepidations about the fate of industries in northern Delaware if New Castle County were to be attacked.

Address delivered to the two companies Brandywine Rangers by their captains Victor and E. I. Du Pont.:

Fellow Soldiers--
We have assembled you on this occasion,  not for the performance of your usual militia exercise, but for the purpose of communicating to you, that the Legislature of this State has thought proper to repeal the law exempting manufacturers from militia duty, and that in consequence thereof  you have become incorporated with the militia of your respective districts.

By the law passed on the 26th of January 1811, you, in common with the other manufacturers of the State, were exempted from military  duty with a view, as appears from the preamble, to the encouragement and prosperity of our infant manufactures.  In the spring of 1813, you voluntarily waived an exemption which you regarded as a dishonor when danger hovered over us.When the foe threatened our shores, you armed and equipped yourselves and tendered your services for the common defense.  Is the zeal you displayed on that occasion an offense?  Had you ignominiously sheltered yourselves under the law and viewed the threatening danger with indifference, would it have been repealed?  These are questions we shall not determine.  But although the favors bestowed on you have been withdrawn, you have the consolation to reflect that those favors were not unmerited by you and of having proved by your conduct how much dearer to your feelings were the claims of your country than your personal convenience or interest.

If the repealing law be intended as a chastisement for your patriotism-singular chastisement indeed! which deprives the state of our services and relieves us from trouble, expense and loss of time from duties infinitely more laborious and dangerous than the insignificant military service.

The zeal and alacrity with which you rallied round our colors when the country was in danger, affords us an ample pledge that you would, if required, cheerfully consent to perform double duty in so honorable a cause and comply with the district duties without abandoning our present association.  The act of the Legislature could thus be easily evaded--for there is no law prohibiting men to exercise with arms on their own premises, or from defending their property in case of an attack.  But as it must be apparent to all that the principal aim was to disband these companies, we had better submit at once.  Let those who have intentionally diminished the actual military force of New Castle County, who, at one blow, have annihilated an efficient corps of two hundred and thirty able-bodied men, well armed, equipped and disciplined, have the gratification of beholding their plans accomplished and let them be responsible for the consequences.

We will then, fellow soldiers, deposit our arms-we are saved the necessity of exposing our lives for the defense of those who have labored so anxiously to destroy an association aimed against the enemies of their country; and when the day of danger shall arrive, it will no doubt bring with it the regret of having by their own conduct deprived themselves of the aid of the Brandywine Rangers.

You will please to return your muskets and military accoutrements to our respective factories-but if in the course of the ensuing spring and summer, we are threatened with a serious attack on the banks of the Brandywine, you will remember that you have here 300 muskets and abundance of ammunition, in short more than is requisite in such hands, among the natural entrenchments of the Brandywine, to repulse five times your number; and if you think proper to pay your militia fines on that day and join your former standard, you will always find leaders proud of your choice and confiding in your courage, ready to tread with you the path of honor and glory.

To which the following answer was returned:

Sirs
In the names of our respective companies we beg leave to express our sincere regret at the necessity which obliges us to relinquish an association we had so cheerfully entered.  To incorporate us, now so well instructed and disciplined, in military companies unorganized, without arms or anything calculated to inspire confidence and insure success will be, as you justly observe, to annihilate a force that was respectable and would have made itself respected.  The motives of such a step are best known to those who have recommended and sanctioned it--if more fines and forfeitures will be collected under this measure, fewer bayonets and bullets will be levelled at the enemy and whether the evil does not counterbalance the good we leave others to determine.

We shall always hold in grateful recollection the zeal you displayed and the trouble and expense you incurred in forming these companies.  Your friendly and officer-like conduct claims our warmest thanks-and when you give the word, it will be our pride and pleasure to follow you wherever our country's service may require.
-Committee on behalf of the Brandywine Rangers.


In April and May of 1814, Daniel King of Philadelphia continued to send bullets and composition bail to E. I. du Pont in anticipation of invasion by the British. During the months of June, July and August, the apprehension of British invasion hung over the Brandywine like a pall. However, during the summer the du Pont brothers were not idle. They gained permission from the War Department to reorganize the Ranger companies for the defense of the Brandywine region.

On August 29, 1814, a notice was posted in the mill villages by Victor du Pont. The notice advised all of those workmen who belonged to the former volunteer corps of Rangers that their former captain was authorized to reorganize their company under immediate orders of the President of the United States. Those who volunteered would again be exempted from militia service, and it was guaranteed that they would not be sent beyond the vicinity of Wilmington. Those who desired to volunteer were told that an election for non-commissioned officers would take place as soon as a sufficient number had enrolled. On August  30, 1814, 135 men offered their service to the reorganized Brandywine Ranger companies.

On September 21, 1814, the reorganized North and South Brandywine Rangers received their arms. They also collected money for purchasing uniforms and other equipment. Two hundred military caps were purchased by the Rangers, and an additional 100 were ordered to arrive at a later date.

The rumors by this time were wildly flying that the British intended to make a direct attack on the Brandywine factories.

On the following November 18, 1814, at a meeting of the officers for the three companies of Rangers held at Captain E. I. du  Pont's house, a committee was appointed for the purpose of revising the rules for the three companies. At this meeting E. I. du Pont extolled the superiority of his Rangers over the performance of the regular state militia.

Thomas Caldwalader, Brigadier General and Commissary of the Fourth Military District, recommended to Victor du Pont on December 13, 1814, that all arms in his possession were to be kept in order at the expense of the Ranger corps. General Caldwalader also informed Captain du Pont that he did not have the power to authorize the appointment of a Major for the Brandywine Battalion. This in reply to a request made by the du Ponts for a commanding officer for the three Ranger companies. Their request was subsequently forwarded by General Caldwalader to The War Department in Washington.

But the war was terminated before the recommendation could be acted upon.

On December 24, 1814, the Treaty of Ghent was signed, ending the War of 1812. Because the news of the peace was slow in coming to North America Irenee du Pont was still purchasing military equipment on the last day of December. The news of the signing of the Treaty did not reach Wilmington until February 13, 1815. Irenee and Victor then retroactively set January 3, 1815, as the date on which official duty had been terminated for the three companies of Brandywine Rangers.
Email Post

lucky883 said…
It is one more example of federal and state governments ignoring the will of the people as well state laws.
Phlebotomy Schools,DEL
10:15 PM